Fusion of the Seasons

Let's face it, for most of us, the weather has been glorious - more like summer than spring.  Some years summer is nowhere near as good as spring is at the moment.

So, what have I been up to during the past week?  More seed sowing I'm afraid - I have had to erect my new mini-greenhouse to take the overspill. 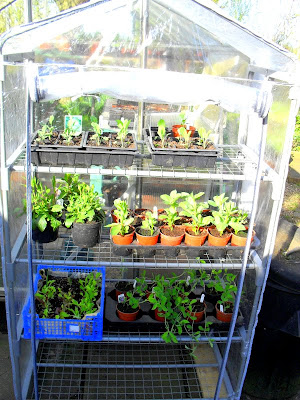 I am hardening off my broad beans in there ready for planting out very shortly.  But mainly, I have been thinking about winter crops - seems a bit crazy thinking 9 months ahead, but Brassicas need a long growing season.

﻿﻿
﻿All of the above have been sown, plus ordinary Cauliflower, Early Purple Sprouting and Curly Kale.

More beetroot and chards
﻿
﻿I wont be sowing any summer cabbage this year as there is always plenty of other veg around and the cabbages tend to get left in favour of beans.

Can't stay long - the warm sunshine beckons.
Is anyone else thinking ahead to sowing for winter?

Before I forget, I should like to thank Jane at Tidy Gardens by Jane check out her blog here for passing on an Award to me

When I have time I will pass this on to 7 deserving bloggers plus give you a few previously unknown facts about myself.  Watch this space.  Thanks Jane.
Posted by elaine at 14:19 25 comments:

What have I been doing every afternoon this week - seed sowing - that's what.  Trying to catch up after my holiday.  Of course there's no rush - it's just that I like to get a few things underway in March - little and often is my sowing motto.

This morning I sowed a row of parsnips and beetroot in the allotment garden
The trick is not to sow too many at a time.  I try and space them thinly so that I don't have the job of thinning them later on.  It is quite easy with the larger seeds like parsnips and beetroot, but a little more difficult with carrots, say, as the seed is quite small.  I will sow more beetroot each month till July so that I have a continuous crop right through the year.  Then, to extend the season, I will sow some in containers, that I can bring them in to the greenhouse when the weather gets colder again.   That's the theory anyway.

I have sown five types of lettuce in modules, three to each station:- Iceberg, Little Gem, Webbs Wonderful, Lobjoits Green Cos and All the Year Round.  The first four are crispy lettuce, All the Year Round is a Butterhead.  I love the crispness of  the first four but will grow salad leaves as well to mix in with the others to give different textures and colours on the plate. I tend to use each lettuce by breaking off the leaves rather than pull the whole plant - that way they keep growing and producing more leaves.  Lettuce do over winter well , so I will keep sowing little and often right through the year, giving the plants protection later on.  Even in summer I protect them with some shading mesh when it gets too hot.

Lettuce look pretty good in the flower garden too, used as edging plants - and if they bolt, and throw up spires, they look even prettier. The last job for today was to transplant Broccoli and Cauliflower seedlings which now have two true leaves.  So far I have transplanted a dozen of each, but again, I intend doing a bit of succession sowing.  Broccoli did well for me last year, enabling me to pick for quite a few weeks.  But with Cauliflower it is best to harvest them quite small as they all produce heads at the same time.

So, I am slowly getting to grips with the growing season, Leeks have been transplanted , more Broad beans and Peas sown, and  a row of Charlotte potatoes put in the ground - I feel I am making a little progress at last.  If this weather holds and I am able to carry on doing a bit every day I'll be a happy bunny.
Posted by elaine at 16:44 13 comments:

There's a Whole Lot of Sowing Going On!

It's that time of year again - but, I seem to be a little behind with my seed sowing.  I can't get myself into gear and get on with it.  You know how it is - I have just come back from holiday and feel all relaxed - now I need to rev up and get cracking.  So - after inspecting everything in the greenhouse to check on progress whilst we have been away - I sowed some more peas (Douce Provence) and broad beans (Aguadulce) and three types of dwarf bean (Rondo, Delinel and Tendergreen).  Only half of the pink flowered broad beans germinated, the rest rotted in the pot, due in part I think to over-enthusiastic watering.

The tomatoes are coming along fine, snug in their mini-greenhouse within the big greenhouse - I still have the Black Russian to sow yet, but I am leaving those for a while so I get a later crop.

﻿
﻿ And the Anya potatoes are just poking through

A Bounty of Beans

Now is the time to start thinking about sowing my first batch of Dwarf or French Beans.  I like to extend the growing season by having a few plants in containers in the greenhouse.  They come in all shapes and sizes each having their own special flavour.  I particularly like pencil thin beans, slim pods that hang in bunches from low-growing plants.  'Delinel' is a French 'filet' bean with a distinct flavour and heavy yield.

I won't be sowing outdoors till late April/early May, once the soil has warmed up and the chance of frosts is less.  The thing about sowing in pots is that you have to make sure the seeds don't rot in the wet compost.  To make sure this doesn't happen I mix in equal amounts of perlite to compost - this ensures the soil is free-draining.
﻿ ﻿ Each year I add a different variety to my collection - last year it was 'The Prince' which is a heavy-cropper with good flavour - this year it is 'Delinel' - of which I have heard good reports, but beans come in a few different colours to add a bit of interest.

After the initial sowing - if I can remember - I will sow a few beans each month outdoors from April to July - to get a continuation of crops.  If I sow them at 2in. intervals it means that I can thin out the weaker ones and also if the slugs decide to make a meal of them I will still have enough left for good crops.  Dwarf beans only produce for a short period so it is important to make several sowings.

It helps to pick the beans regularly when they are small, as soon as the beans start showing in the pods they become tough and stringy, and it helps to keep the plants producing.  All the beans require is a good, rich, soil and plenty of water.

Towards the end of the season I will plant some in pots in the greenhouse again to extend cropping into October.  I can't ever remember having a bad season with French Beans, as, unlike runner beans, they are self-fertile and don't rely on pollination.

When do you start sowing your French Beans?

All photos Google images except the last one