I thought I had better do a post over here as I have been included in a list of Top 20 Gardening Blogs to follow (see here) - listed as a seasoned veteran - HA!  Unfortunately one or two of the facts aren't quite right - apparently I tailor my blog to all things associated with Italian cooking - not sure where that came from!

Anyway, here are a few pics of how the kitchen garden is progressing in July - the month when everything starts coming to fruition - signs that all the hard work is paying off.


So there you have it - proof, if proof were needed, that a tiny garden can produce plenty of veg - well, enough to keep two people fed throughout the summer anyway.﻿﻿
Posted by elaine at 18:54 10 comments:

State of Play in the Kitchen Garden …

It has been a busy week in the veg garden.  Because it has been so cold outside most plants are still-in-waiting in the greenhouse but because they are putting on rapid growth I have had to do a lot of potting on. 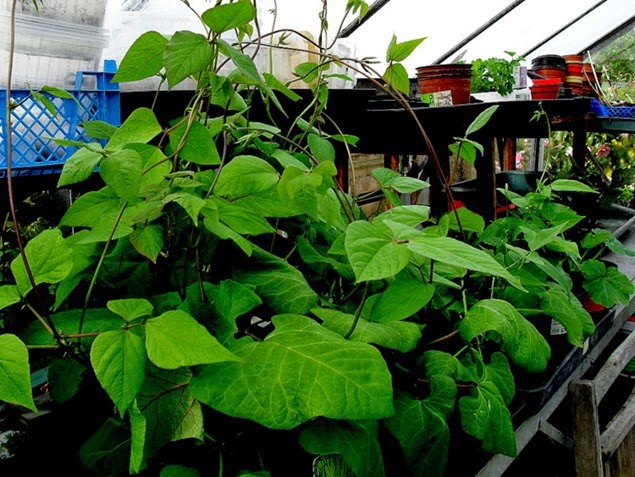 The runner beans, for instance, are growing like crazy – so I have potted them on till it gets a little warmer – I have been caught out before with strong, cold winds that caused leaf burn – it just isn’t worth the risk and I would hate to lose them at this stage in the game. 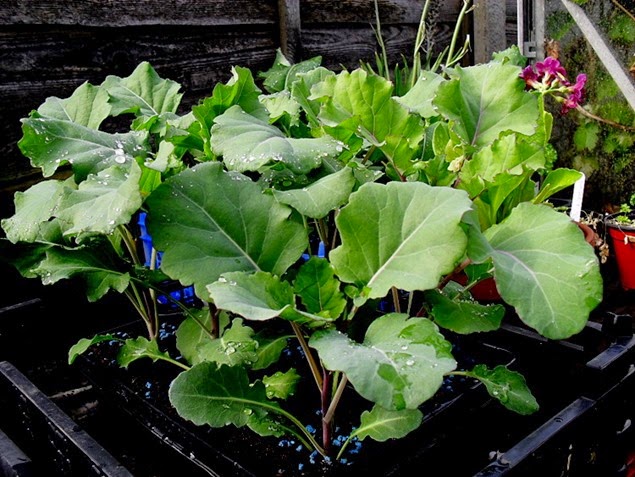 The purple sprouting broccoli has been outside hardening off and have now been planted out into their final positions, sprinkled liberally with slug pellets and covered with netting. 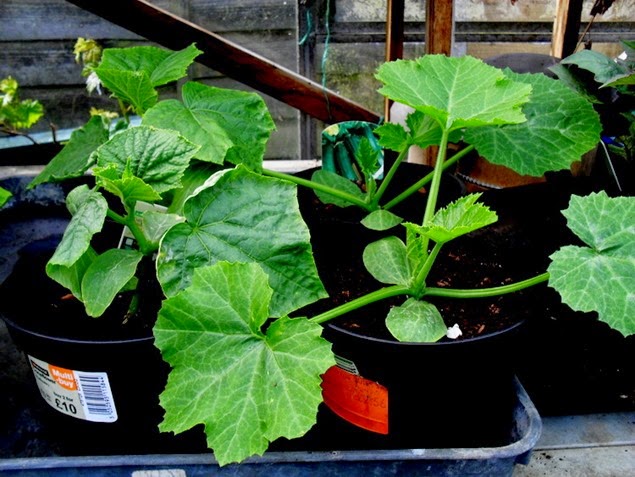 Cucumbers have been planted out into large pots but they will be staying in the greenhouse and the courgettes will be staying where they are for a couple of weeks – I still have the ground to prepare for them adding manure to the planting holes to ensure a bountiful harvest – hopefully! 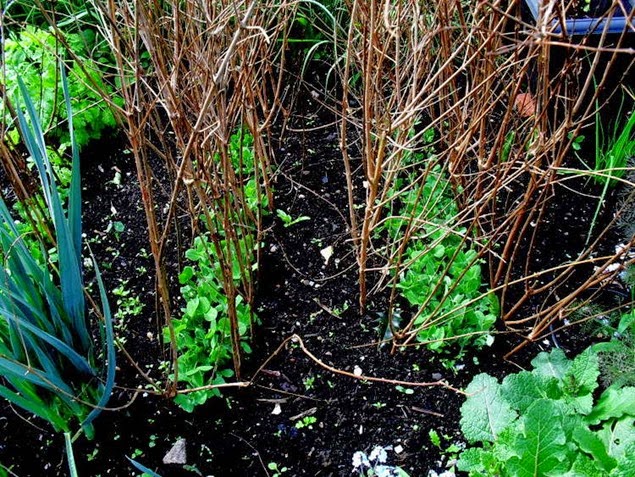 The peas are coming along nicely in the open ground and the ‘twiggy peasticks’ (old fuschia prunings) have been inserted for support. 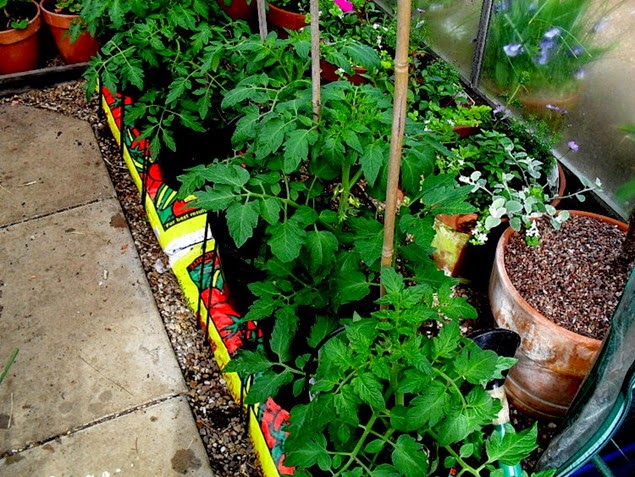 The indoor toms are making good progress and I have planted out the Sungold outdoors with a polythene grow house over them for protection – the Gardeners Delight which are also going outdoors have been potted on until the risk of frost has passed. 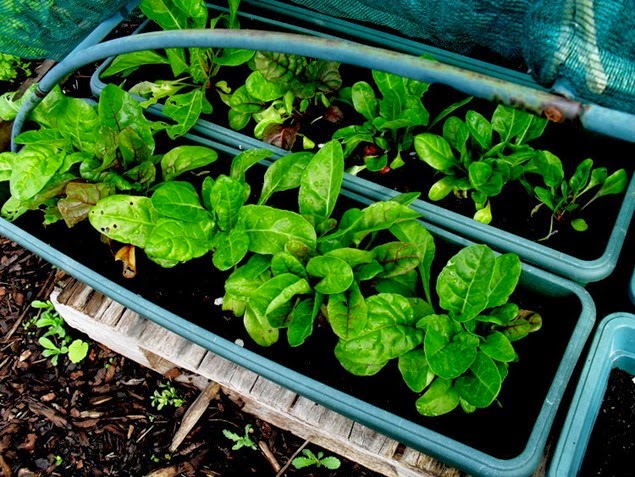 Chard is growing in containers which have been covered with a frame and fleece till they got themselves established – seem to be doing ok and look pretty healthy. 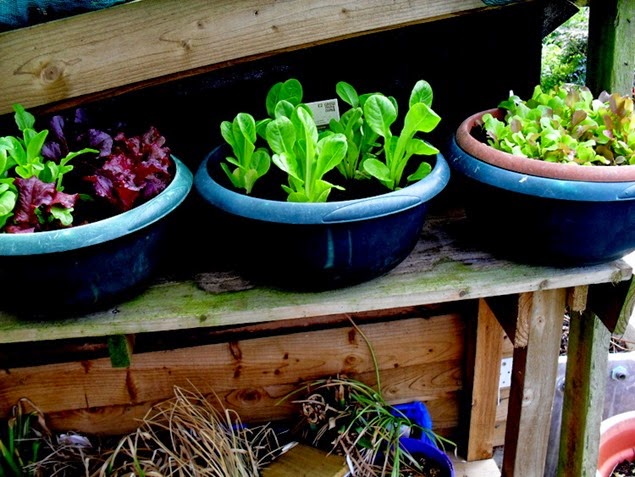 This is the salad bar – these lettuce and salad leaf are growing in washing-up bowls which have been covered for protection at night, the first lot of Little Gem suffered with stem rot (over vigorous watering I think) so I bought some plug replacements to keep me going. 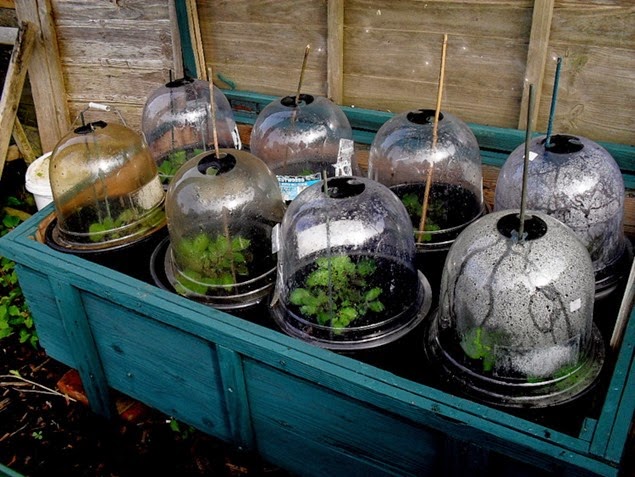 Growing rapidly in the containers, potato Charlotte – the bell jars have offered overnight protection – just one more covering with compost and we have reached the top.  The potatoes in the ground have been given their first earthing up to keep them covered – I was caught out with a frost when they first appeared and one or two leaves were scorched but it doesn’t seem to have done them any harm.

So there you have it the Rosebank kitchen garden in full swing. 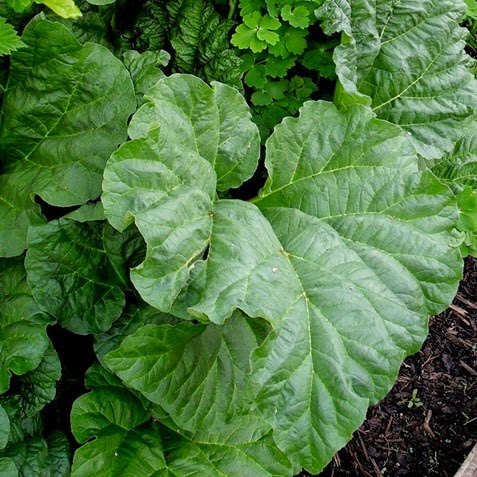 I don’t know about you but I always look forward to the first rhubarb  of the season.  Seeing the leaves grow bigger and bigger, pushing them aside to find the juiciest sticks and giving them a gentle tug is one of life’s simple pleasures. 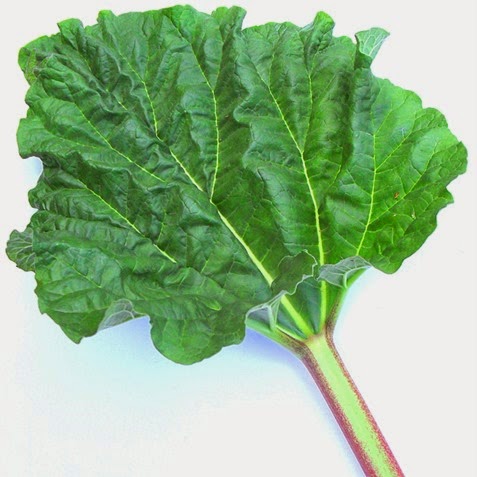 I pulled a dozen sticks – which in supermarket terms is £4.50’s worth – surely it must be one of the most worthwhile crops to grow.  It just keeps coming and coming – the more you pull the more you get.  I know some of you have more than one type planted  but I personally think one crown is enough.

I soon get fed up with the constant supply – even though I have tried many ways of eating it; rhubarb and strawberry compote; rhubarb pie; rhubarb gingerbread puddings; rhubarb and banana fool; rhubarb and ginger jam; rhubarb chutney there are plenty of different ways to use it up – you only have to take a look at Pinterest under the heading of Rhubarb to see just how many recipes there are. 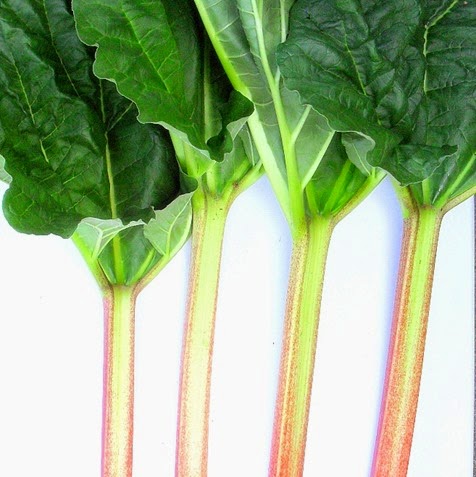 I personally don’t bother forcing mine but I do try to pull the stalks before they get too big and stringy.  I don’t bother freezing much either as it takes too much room up in the freezer but I do have a daily bowlful during the season – which for me is up until July – then I leave it alone, generally, to give the plant a chance to recover.  I once read an article on some long-lived gentleman who said that his secret to a long life was rhubarb – so you never know – it may work for me too!

“The first ‘forced’ rhubarb, those gently tart stalks that appear in the market around Christmas time, came to prominence in the 1800’s, thanks to an ‘accident’ at Chelsea Physic Garden.  The story goes that it was here in the winter of 1815, when the garden’s rhubarb patch was accidentally covered with builder’s rubble, that this particularly fine-tasting form was first discovered.  The pale pink stalks that were unearthed by the gardeners in early spring were found to be extraordinarily mild and sweet, and a new kitchen ingredient was born.” ~ Nigel Slater 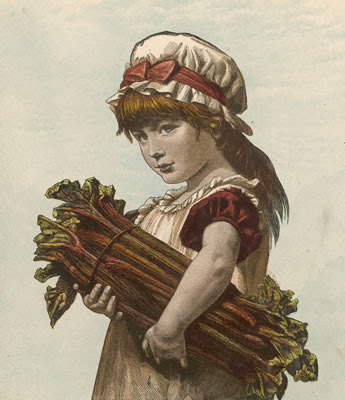 A Busy Time of Year for Veg Growers …

Well, it’s been almost six months since I posted – I guess you could say that I am a fair weather blogger as far as the kitchen garden is concerned.  But I haven’t been idle – oh no – there has been lots going on in the background.  Plans have been made and carried out, the raised beds have been cleared and are ready for planting and it’s all systems GO.

One bed has been planted with potatoes - Charlotte earlies and another sown with Hurst Greenshaft and Kelvedon Wonder peas.  I decided to direct sow this year, trying to keep the work load down and simplify the gardening tasks.  The third bed is reserved for two Courgette plants and the fourth for PSB.  Anything else I want to grow will be in containers – Runner Beans, French Beans, Tomatoes, Cucumber, Lettuce, Leeks and Chard.  Have you noticed that I have reduced the variety of veg that I shall be growing this year – I am only growing veg that is obviously better tasting than shop bought or more expensive to buy.

These are a few pictures of what is happening so far. 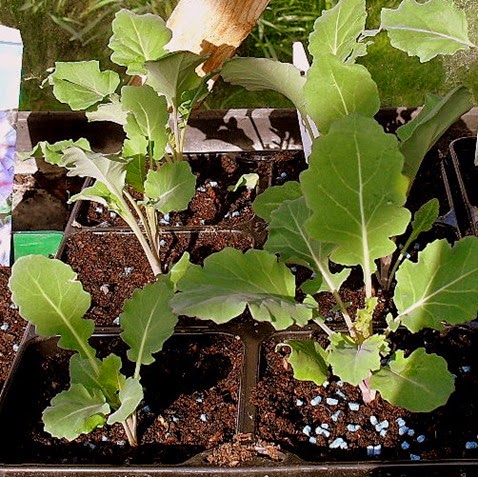 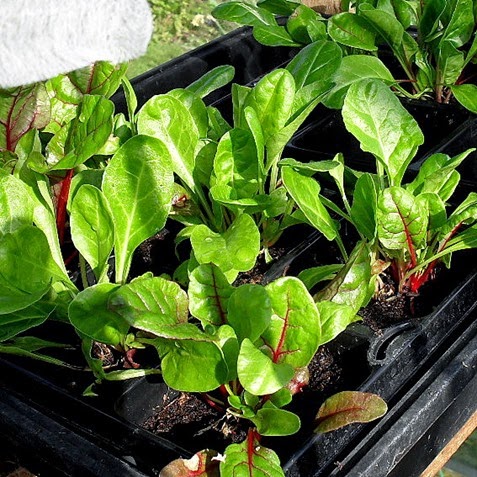 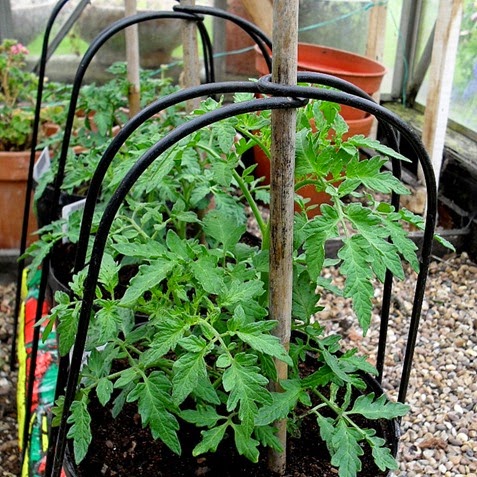 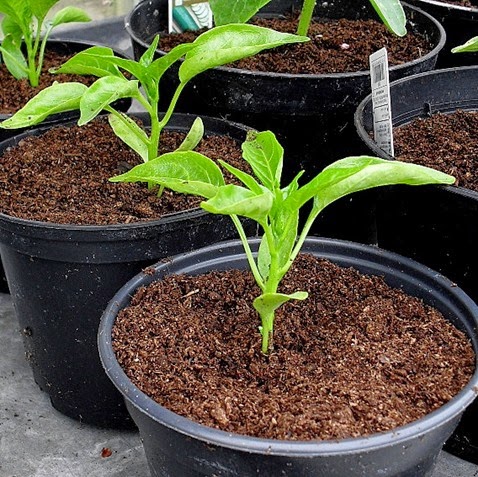 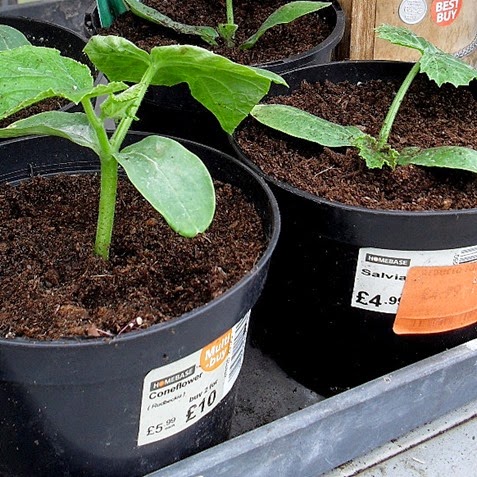 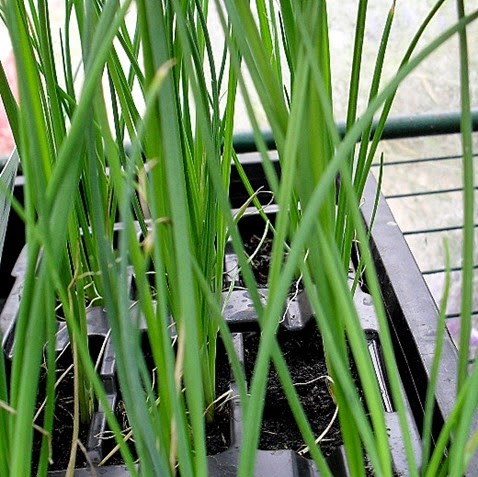 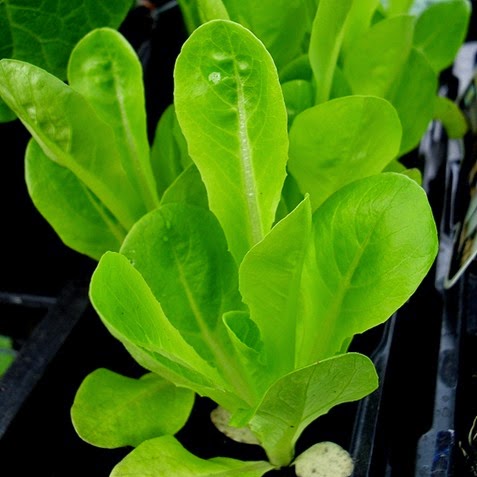 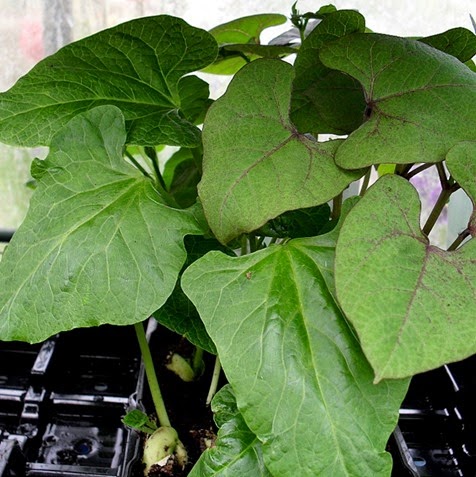 Most of these will be potted on before they are planted out – waiting for the last frosts.

It’s good to be back in the swing of things again isn’t it and I hope we all have a successful veg growing season.