I think we have all suffered from mixed fortunes with our veggie growing this year, so as it is the end of the summer growing season, I thought I would look back and record what has done well and what has done not so well in my kitchen garden.
The first crop to be harvested and the last.  Every batch I sowed after this picture was taken, bolted, due to the dry weather, I expect. 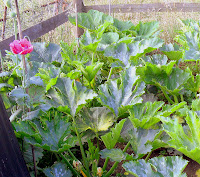 Courgettes haven't done too bad, after a good start they slowed down a bit, lack of water again, I suspect, but I still had more than I could handle.  Patty pan squashes have been very prolific, I put three plants in, if I grow them again next year it will be only one plant.  Butternut squashes are rubbish this year, the fruits are only just starting to form, so I am sure they won't be ready before the first frosts.  Very disappointed, as last year I had a bumper crop. 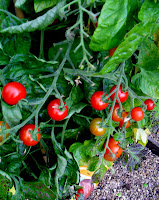 Tomatoes in side and out have been excellent.  Unfortunately, the indoor tomatoes have now finished, but the Sungold outdoors are still fruiting well and don't seem to have been affected by the colder weather, although the winds we had earlier in the summer battered the leaves a bit. 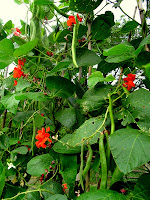 The runner beans have been excellent, after a slow start, but they too are nearly over.  But the French beans have been very disappointing, running to seed very quickly.  I shall use them as dried beans over the winter. 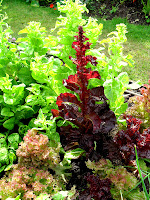 I have struggled with lettuce this year, the dry weather has a lot to answer for.  I have been picking leaves every day, but as the picture shows, most of the lettuce bolted fairly quickly.  I have lots more seedlings in the greenhouse, coming on nicely, hopefully to see me over winter.


These are just a few of my triumphs and failures.  I shall post part 2 next time.
Posted by elaine at 19:41