Roll on Next Spring

Well, thats it then, summertime is officially over - the clocks have been put back - and we head on in to a world of darkness for a few months - not so much time to spend in the garden, no popping to the allotment to do a few jobs in the evening - waiting for it to get light in the mornings - roll on next spring that's what I say 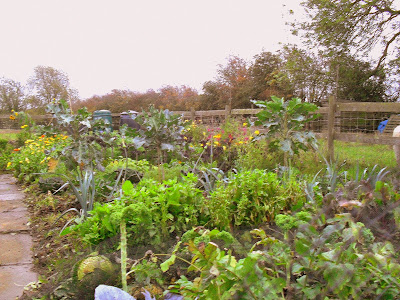 I have just finished reading a book called 'The One-Straw Revolution by Masanobu Fukuoka.  It is about going against the face of conventional farming and vegetable gardening by growing things in a semi-wild state.
Most of the book is about Mr. Fukuoka's experiments with rice-growing in Japan in a non-traditional way, but it is his philosophy about simple living that interested me most, and his ideas about the random growing of vegetables using, what we would call 'permaculture' methods.  Using green manures, weeds and straw as mulches, randomly sowing seeds and letting the plants do their own thing - fascinating stuff, I will certainly be using quite a few of his ideas during the next growing season.  One of his theories is that insects walk in straight lines, so if you plant a straight row of veg, they will just walk along the row and munch the lot, whereas, if you sow haphazardly they will have trouble finding the next plant.  Simple idea, but effective, I would think. 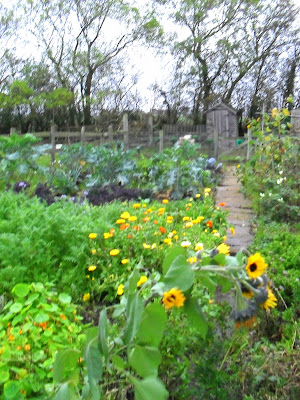 As you can see, we haven't had any frosts yet, so the allotment garden is still going strong, and I am loathe to get rid of anything that is still showing plenty of colour. 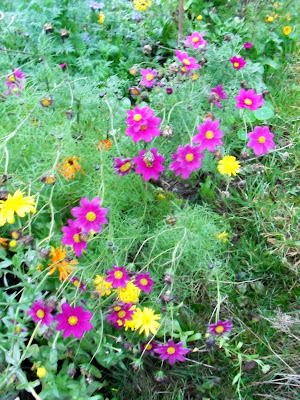 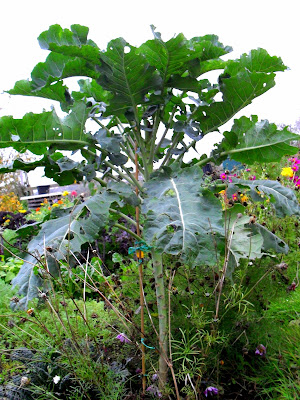 Come next spring there should be plenty of dinners to come out of this plant - if it survives through the winter, that is!
Posted by elaine at 08:42